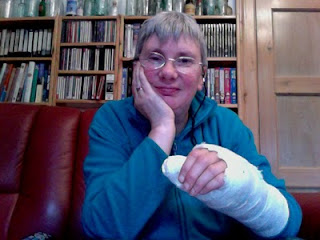 Last Friday I was in Raigmore Hospital in Inverness having an operation on my right hand.
Actually it was really two operations side by side. The main one was a trapeziectomy - removal of the small bone at the base of the thumb. As I have also been experiencing problems resulting from carpal tunnel syndrome, the surgeon took the opportunity to deal with that at the same time.

I was offered a choice between nerve block or general anaesthetic and after discussion with the anaesthetist, opted for the former. The appeal of this was that I got to see parts of the operation in progress. Some might consider this a bit ghoulish, but I studied Biology at university and I always enjoyed dissection. Actually, I did have some sedation and slept through some of it. I have no recollection of the final stage of having the wounds closed up and the plaster put in place.

I stayed in hospital for one night and although the stay was comfortable, I was very glad to get home. The biggest problem was coping with the disruption to normal bowel activity caused by the ineffective pain-killers prescribed at hospital. Now everything is back to normal and I am in very little discomfort. In fact today I was more or less back at work. There are lots of things I can't do with my right hand in plaster, but I have found a surprising amount that I can do.

Today I managed to handle both embroidery machines, the electric shears and the laser cutting machine. Mary was at work today and she helped me when I got stuck. For example, I made up an Angus style hat, but I couldn't press the center seam open around the curve of the crown - that definitely needed two hands. Between us we finished off the order for Highland House of Fraser - a highlandwear shop in Inverness - and I will deliver that tomorrow. I also got a wrap embroidered and a few more cut out to stitch tomorrow and they will soon be heading to Canongate Jerseys & Crafts in Edinburgh's Royal Mile.

First thing this morning I walked along to the post office with parcels of hats. One parcel of Morags went off to St Andrew's Cathedral in Fife (run by Historic Scotland) and another two parcels of Mairi and Angus hats went off to De Paz in Italy, a shop in Bologna. It has been quite a summer for hats - perhaps because of the rather dismal weather this summer! In the last couple of weeks we have supplied repeat orders of hats to Shetland, Orkney, Lewis and Harris. Next on the list is Iona Abbey. During my walk I became very aware that I was indeed "sticking out like a sore thumb"! If one wants the sympathy vote in the health stakes, a plaster cast on your right hand is the way to go.

Besides hats, we seem to have been selling quite a few large wallhangings. As many of these include hand-made felt, I had quite a rush in the last couple of weeks making new pieces. Felt-making will definitely be out of bound for several weeks! I got several new ones made before I went into hospital and over the next few weeks these will be heading off to various galleries.

The chemist's shop had also got my "stukie bag" today, so now I am off to enjoy a leisurely bath. Washing has been one of the more difficult things to do without a right hand!
Posted by Ruth Black at 21:02