All white - inside and out 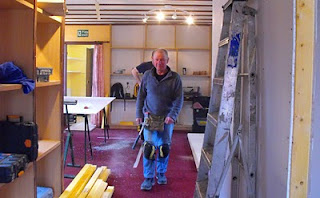 Last week, during some almost balmy spring weather, the joiners were hard at work in the new Anna Macneil studio building a partition wall and putting up new shelves. It is looking good.

This week it is back to winter and we woke up this morning to a blanket of snow. The studio seems to look even more like a Swiss chalet when it is covered in snow. I spent the day out there trying to make the inside white too. The painting has to be done before the heating goes in, so it was rather cold and I had to work hard to keep warm. 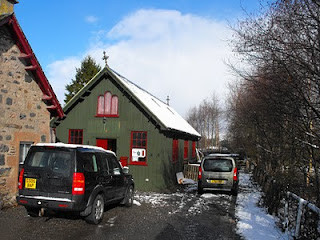 The morning was spent removing the nails and screws that were all over the walls and filling in the resultant holes with filler. Then a mug of hot soup at lunchtime thawed me out a bit and I got going with the painting. Last week I bought a "Paint Pod" system and I have to say it is proving to be a good system - very clean compared with the traditional method of rolling. By mid afternoon I had covered up all those bits of wall that were yellow. 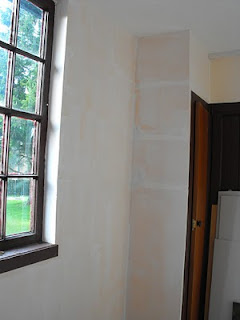 It will need another couple of coats, but it has already made a difference. Work has had to go on around getting the new studio ready - last week we sent off a big order to Canongate Jerseys & Crafts in Edinburgh and it included this wallhanging - inspired by the Pictish Stone in Elgin Cathedral. The red panel beside it is one that I painted many years ago. The only reason it is in the picture is that when I wanted to photograph the wallhanging, the easiest place was hanging beside it - there is a convenient nail in the wall which usually has a calendar on it.

Next up I have to make several large wallhangings for various galleries and we have bags, hats and scarves to make for Iona Abbey and Stirling Castle. I need at least 36 hours in a day and 10 days in a week - preferably hours and days that other people don't have! If the rest of the world would just go into suspended animation for a few days I might be able to catch up.

Tomorrow I will spend a couple of hours at the computer and then head out to put a coat of paint on all the walls. I shall leave the ceiling for Mary to do on Friday!
Posted by Ruth Black at 18:11