Making progress with my Hattersley loom

I spent the last week of November on the Isle of Lewis, much of it working on my Hattersley loom. 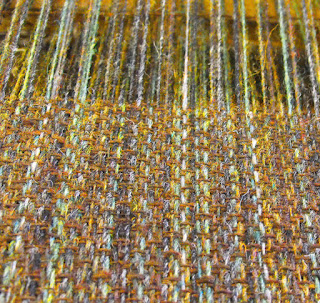 The first task was to cut off the tweed I had woven over my last two visits.  I was reasonably pleased with what I had done but I was aware that the warp had been problematic in several places with crossed and tangled ends that resulted in the weaving being rather slow progress.   I made the decision to cut it off and re-tie.  However, I also wanted to try a different weave pattern.

The tweed I cut off has gone off to the mill for finishing  and I am looking forward to getting it back so that I can make it up into a variety of Anna Macneil products.   The warp is a variety of shades of green and grey and I have woven several sections with different colours of weft - black, olive green, brown, soft green and yellow

Along with the loom I had acquired several sets of heddle boards, each tied in for a different weave pattern.  The one put on the loom when we set it up was for Bell's Celtic (picture above) - threading sequence: 1-2-1-3-4-3.  This is a common weave used for mens' sports jackets - quite attractive, but not really what I want to weave.  I wanted to set the loom for weaving herringbone.   There were three sets of boards set for herringbone.  One was for a wide pattern and not really suitable for the tweeds I want for making our range of scarves, wraps and Hebridean Hoods.  The other two at first glance looked the same but a quick count established that one was for a much finer cut of yarn.  The threading pattern I wanted was 1-2-3-4-1-2-3-4-3-2-1-4-3-2-1-4-3-2-1 - an 8-8 herringbone. 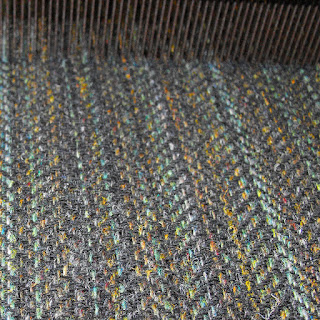 I figured out how to release the boards - with a bit of brute force and ignorance, I eventually got them swapped over and set about tying in what remained of my warp (about 10 metres).   That got me all ready for Angus to come and show me how to adjust the loom to allow me to use two shuttles rather than just one - i.e to be able to weave with different colours of weft yarn.  This picture shows the herringbone weave pattern.

First there were a few adjustments that needed to be made - a couple of things that were out of place and needed to be adjusted and tightened, then we were ready to go. 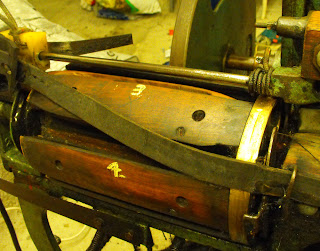 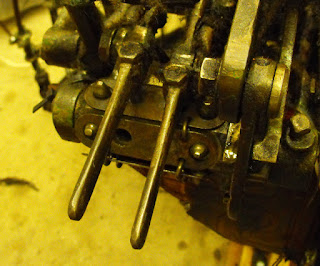 On the right-hand side of the loom is the shuttle box.  This is a revolving contraption which will hold up to 6 shuttles. Its position is controlled by a simple system of two small levers which pop up and down.  A chain of small metal plates is used to control which lever is up or down.   Each plate has a hole at each end - these are simply locator holes that keep the chain on track.  They also have a choice of one or two holes in between.  If there are two holes, the position of the box does not change.  If there is just one hole the box will either turn forwards or backwards depending on whether the hole is on the left or the right.  We selected a very short chain of just six plates - the smallest number that you can use to fit into the mechanism.  It was set to very simply move the box backwards or forwards between two positions.  This means it would create two picks of one colour alternating with two picks of the other colour. 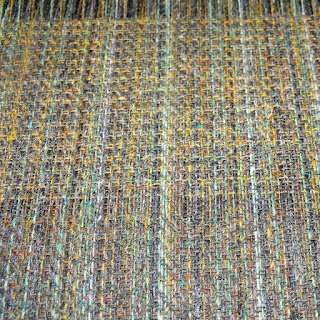 One of the benefits of this system is that it allows one to weave more between stops for bobbin changes simply by using the same colour of yarn in each shuttle.  However it does mean you have more to keep your eye on to avoid mistakes and running out of weft yarn. In the photograph the lower section is woven with two shuttles holding the same colour of weft.  The upper section was woven with a light yarn on one bobbin and a dark yarn in the other.

The next day I persevered for a few hours but eventually decided to revert to working with a single shuttle - better to master walking before trying to run a marathon!  Over the next couple of days I finished off the warp, weaving 5 lengths of tweed suitable for making into scarves or wraps.

Angus had very kindly brought me a warp that he had prepared and it will go on the loom when I return to Lewis.  It will be something of a challenge as it has a definite pattern - no room for errors - and it will look best if I weave it with a mix of three different colours to create a small dog-tooth check.  Watch this space!
Posted by Ruth Black at 18:56