This is the story of how members of the Avoch Friendship Club made a felt banner in the parish church hall.  The banner is fourth in a series of five banners being made to celebrate the work of George Bain under the auspices of Groam House Museum.   To read about the first three banners click on the titles for the links.
Banner 1 - made by Groam House Museum Volunteers Group
Banner 2 - made by Resolis Friendship Club
Banner 3 - made by Culbokie Friendship Group 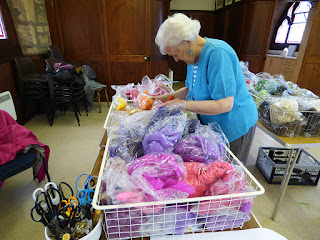 A few minutes was spent explaining to the group about the design. Unfortunately I had forgotten to take the full-size paper design out of my car before my husband went off to Stirling for the weekend, but we did have the benefit of the Culbokie panel to guide us.
The first step was to choose the colours to use for the knotwork sections around the edges.

Each person chose two colours that provied a good contrast and started by laying down the darker of the two in small tufts.
Next they laid the brighter/lighter shade on top with the fibres running at right angles to the bottom layer. 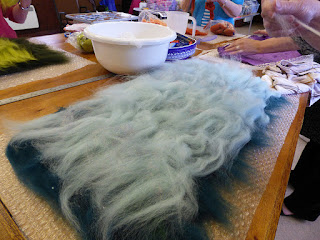 Then it was pour water on top, lay on a sheet of bubblewrap and start rubbing.
The purpose here was to make pieces of half-felt - enough rubbing to hold the fibres together to make pieces that could be cut out, but still soft and pliable enough to allow them to felt onto the background at our next session.
As we worked we discussed the design theme for the centre of the panel.  Avoch was at one time an important fishing village and there are still many people involved with fishing boats who live in the village.  We decided that there should be a traditional sailed boat known as a Zulu boat, and that the text should be part of the poem "The Silver Darlings".
The designs were traced onto special thin fabric that could be put against the wet felt so we could cut out the intricate shapes.  By the end of the day we had the necessary numbers of pieces, all cut out and ready to go. 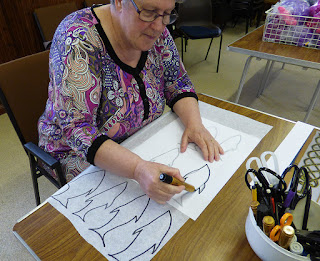 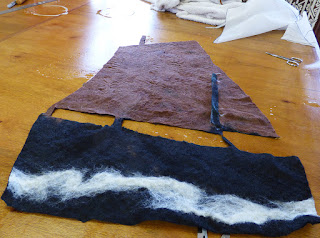 As well as pieces of felt for the knotwork panels, we also made a large piece for the boat and another couple of pieces from which fish shapes would be cut.

We started by laying out the plan on the floor and putting our knotwork panels around the edge so we could all think about the design while we prepared the background. 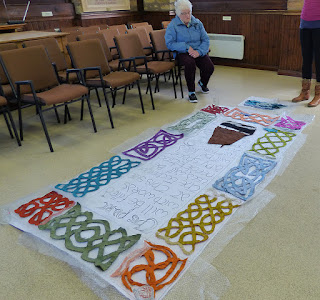 As with the other banners in the series, we were working on a table 4 foot by 8 foot.  This was covered first with a sheet of bubblewrap, then a layer of icewool fabric.

We started laying down the white merino wool fibres - working from the middle towards the edges.  Then another layer was laid on top, but this time with the fibres running perpendicular to those of the bottom layer.
While most of us worked on this, Jackie sat and threaded tiny gold sequins onto some very fine merino yarn - more will be revealed later! 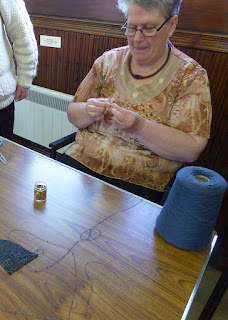 Once all the white wool was in place we chose some decorative fibres and added them to the surface to provide texture.  We were quite disciplined with this - the top half had additions in shades of pale blue and pale grey (sky colours) which the bottom half got some greens and deeper blues (sea colours). 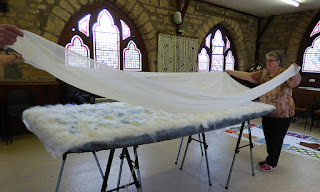 We laid a sheet of organza on top to keep things in place while we poured on a lot of warm soapy water, then a sheet of bubblewrap so we could spread the water through all the fibres and get everything really wet - towels on the floor to catch the drips!  After a few minutes of rubbing we removed the organza and took a well-earned rest.
After lunch we studied our plan and re-arranged all the knotwork panels until we were happy with the design before transferring each piece to the main felt. 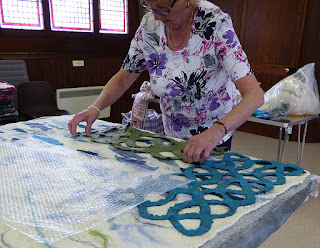 Then our Zulu boat and lots of fish were added to the lower part of the panel, with some fish swimming in and out of the knotwork.  Jackies threads of sequins were added in, some looking like drift nets trailing down from the boat, others streaked through the knotwork so that the sequins looked like lots of shiny bubbles. 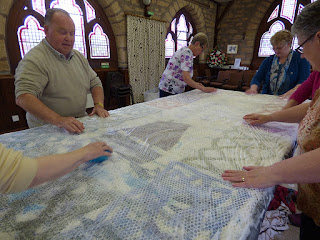 These two days were spent needlefelting.  This is a process sometimes referred to as dry felting and involves stabbing through the felt with barbed needles.
The table was set up at sitting height and covered with slabs of expanded polystyrene.
We started by working out where all the lettering would go and pinning guideline ribbons for the baseline of each line of text. 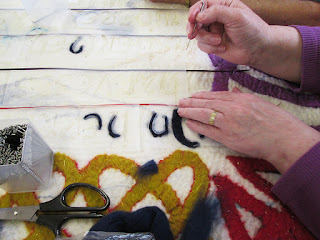 For our text we had chosen to use the first two and last two lines of a poem called "The Silver Darlings", a name given to the shoals of herring which provided the livelihoods for so many fishing villages in the 19th century, but which also led to many deaths at sea.
Oh herrings are harvests that fishermen glean
where flashes the silver through deep oceans green......
.......The wives and the sweethearts are people who know
the price of the silver darlings.
Once all the text stencils were in place it was a question of needling our navy blue wool fibres through the stencils to build up the letters. 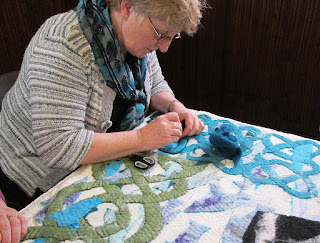 Others worked at the lower end of the felt adding detail to the fish, the boat and the knotwork.
When the lettering was complete we were able to work on adding the detail to create the over & under effect that is typical of Celtic knotwork. 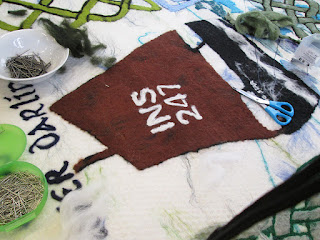 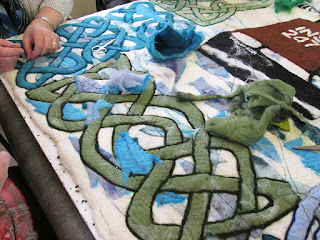 We spent the morning of our last day finishing off the detail with more needlefelting.  Some of the lettering was a bit thinner than other parts so we thickened parts up to make it look a bit more even.
Throughout the day we had people dropping in to watch the work in progress - word had spread through the village and people were keen to see what was going on.   Some found themselves sitting down for a few minutes with a felting needle in hand! 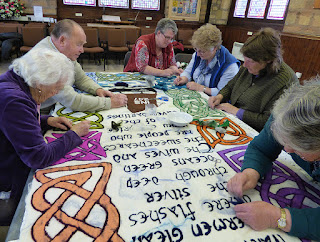 Those who came in the afternoon had to done a plastic apron and join in the rubbing!  As on day two, we had the felt flooded with warm soapy water and sandwiched between two layers of bubblewrap while we rubbed .......... and rubbed....... 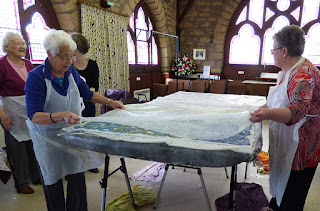 It was important to get everything fully felted as we hope these felt banners will be around for many years to come, so we all worked hard to work up a lather.  This ensures that the wool fibres all tangle up on each other - the essential process in feltmaking. 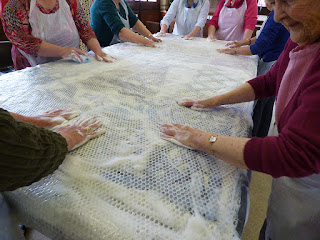 The final process is milling.  We first rolled up the felt squeezing out as much of the soapy water as we could - a lot landing on the floor in the process!  We then spread towels over the table and laid out some large bamboo mats.  The felt was laid on top of this and the whole thing rolled up like a swiss roll.  We worked in teams, rolling first from one end, then the other.  Then we re-arranged the mats and rolled from side to side. 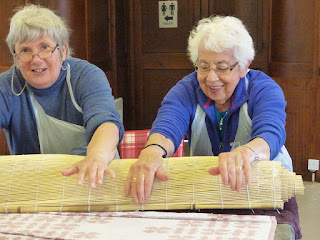 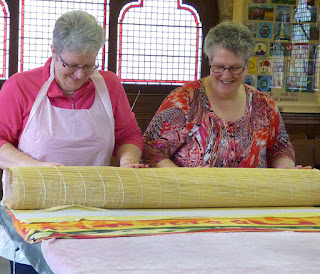 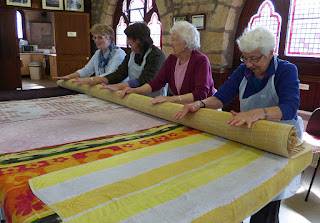 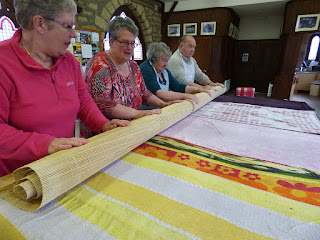 The final stage was to to pin a fabric tube onto the back of the top edge of the felt so we could hang it up and stand back to admire our handiwork and have a group photo. 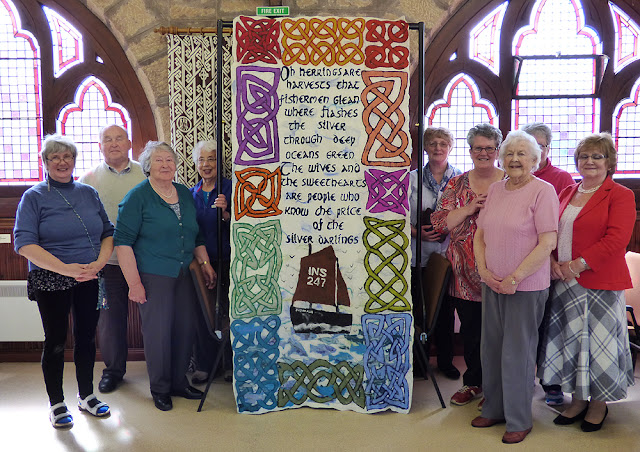 All that remained was for me to take the banner 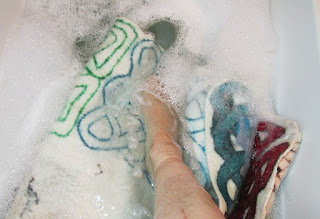 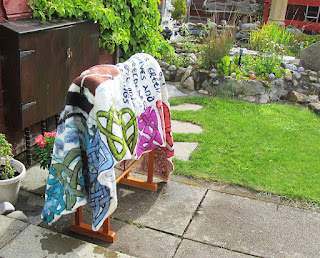 home and rinse out the soap - a process which needs a bath rather than a sink due to the size of the felt, and treading it with my feet to work out the soap.  Four rinses later the water was running clear so I squeezed out what water I could and hung it out to drip dry in the garden.

There are far more photographs than there is space for on this blog but you can click here to watch the slide show or download individual photographs.