I am just back from another visit to the Isle of Lewis.  I go there for a week or so most months to look after my elderly mother.  A lot of my time is spent cooking and filling the freezer with home cooked meals for her to eat between my visits, but while she is resting (most of the time!) I go out to the loom shed and weave Harris Tweed. 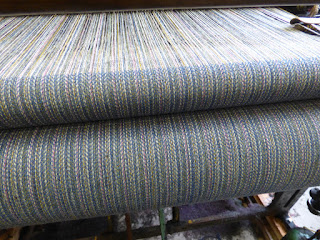 I finished off the tweed that was on the loom - it had about 20 metres still to be woven when I left after my last visit in August.  This particular warp was all pale colours, mostly cream, grey and oatmeal, but with single strands of pale pink, pale blue and pale green repeating every 24 ends.   Perhaps not the blue, but all the other colours were like icecream colours, perfect for weaving on hot summer days - mint, chocolate, strawberry, pistachio.  I wove most of this with a cream weft, 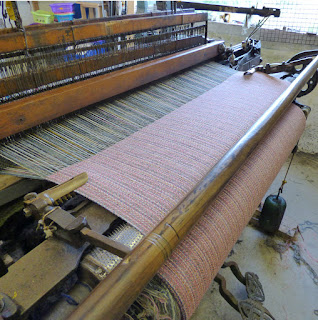 It may look a rather random pattern but it is actually a semi-regular herringbone - an 8/8 coupled with 4/4.  It is easier to see the pattern when there is a strong contrast in colour, but I was not aiming for the pattern to be obvious, more one that draws one in to look more closely. Of course there may be the odd threading mistake - but it is not really the pattern that counts here - it is helping to break up the stripes of the warp to create an interesting texture. 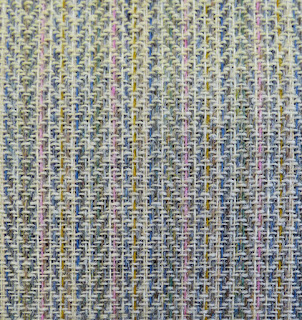 I took the tweed to Carloway Mill on Monday morning where it will be washed, finished and stamped with the Orb certification mark.  I will probably get it delivered to our studio in about 3 weeks time and then it will get made up into our cosy wraps, scarves and hooded capes.

I also made up a new warp ready for my next visit.  The loom shed is a very cold place in winter - a metal garage door that doesn't keep out the wind, no heating or insulation and a hard concrete floor - so I decided that I could at least have warm colours to look at while I weave.  I chose several shades of reds and wines and added in the odd cone of pink and orange.   It is going to be stunning when it is woven, even though I will probably tone it down a bit and most of it will be woven with a very dark plum colour of weft. 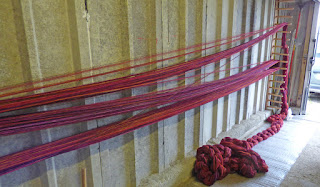 The only problem was...... I made a huge mistake while winding the warp as on one round (out of 29) I must have missed one peg, so those 24 ends were 8 metres short.  I only discovered this as I was chaining off the warp prior to transferring it to the loom.  I had to lengthen each of those ends but inevitably, when tying in the extra lengths, some of the yarn has got crossed over and tangled.  You can see in this photograph what the problem is - I had to put the warp bundle back onto a higher post and twist it round to keep in place while I tied in the extra lengths. 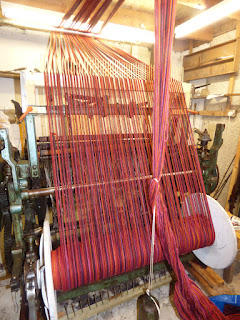 This stupid error meant that I knew there were going to be tangles as I beamed the warp so I declined the offer of help with beaming (better not to have an audience when one is getting cross!!).  It means the beaming process is very slow.  I worked out a way of keeping a good tension on the warp as I wind, it is effective but slow.  I have managed to get past the problem area - I have probably wound about
20 metres onto the beam, another 40 to go but I had a ferry to catch so just had to leave it at that stage.  What I have been doing is attaching one of the cloth weights using a bit of thin rope and a larkshead knot, winding about 80cm then sliding the knot down the warp before repeating the process... and repeating ....... and repeating!   I have left it with the weight in place as I don't want the tension slacked off before I go back to finish the job next month.

This warp is 60 metres, so it will probably be December before I finish the weaving, it may even stretch into January depending on how much time I can spare to visit the island.  Watch this space!
Posted by Ruth Black at 21:34