As I write this, I am sitting in our room at the Steam Packet Inn in the Isle of Whithorn looking out over the harbour as the sun sets. It is as idyllic as it sounds, but it's not all play. I had to travel to Glasgow yesterday - one of my embroidery machines needed fixed and I had a trade show to visit so we decided to take a short break and fit in a visit to Whithorn before the museum and visitor center shut up shop for the winter. 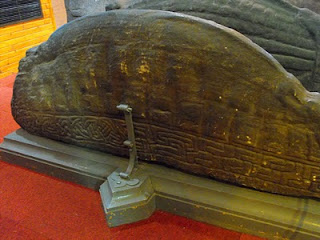 we visited Govan Old Parish Church which has a large collection of Celtic stones including 5 hogback stones. I had visited here before but in the days before digital cameras so had only a very limited record of my visit. While I was photographing the stones my husband was interviewing one of the church elders for a radio programme that he does once a week on Moray Firth Radio. At the time that many of these stones were carved Govan was a very important ecclesiastical site but it declined in importance once Glasgow Cathedral was built. The church buildings on the site have changed over the centuries with the current building having been erected in Victorian times. The stones are housed in the church and in the care of Historic Scotland. There are many different interlace designs along with images of people on horseback and an interesting (probably pre-christian) sun symbol. 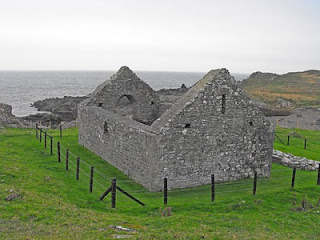 We came down to Whithorn in south west Scotland yesterday afternoon and have spent today visiting the sites associated with St Ninian - the earliest recorded Christian missionary to Scotland. Just round the corner from the inn is St Ninian's Chapel - one of the contenders as the site of Ninian's original Church - Candida Casa. Others believe that it was 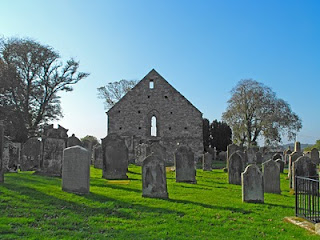 at Whithorn where St Ninian's Priory was a major ecclesiastical centre in early medieval times. At the priory I visited the museum which has a

large collection of Celtic stones and crosses. These are quite different from the cross-slab Pictish stones in our own part of the country with influences from Northumbria. The most striking feature is the cross shape - wheel-headed

crosses where the arms don't protrude beyond the bounding circle. The next thing I noticed was that although some had true interlace designs made up of a single line of knotwork, in many others the design consisted of lots of interlinking loops joined up with simple circles. 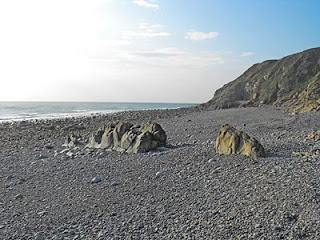 Later in the afternoon we walked to St Ninian's cave - one of the sites of pilgimage. It was a pleasant walk down through a wooded glen and then along a pebble beach. Some of the carved stones in the museum came from here, but were moved to the museum to keep them safe.

Once we get home I will begin work on some new designs that take their inspiration from stones I have seen on this visit. One project is to do a new stole design based on the crosses here at Whithorn and utilising the new St Ninian tartan that was created to commemorate the Pope's visit to Scotland on St Ninian's Day a few weeks ago. When done I will post a picture on my website for Ecclesiastical embroidery. Other examples of Celtic knotwork that I have seen may find their way onto some of my tweed wallhangings. I have certainly seen enough over the last couple of days to provide inspiration for a lot of new work.
Posted by Ruth Black at 18:27