Until today, the vast bulk of our cutting of fabric has been done on the floor. That in itself has not been a problem - I like sitting on the floor, have no problem being on my knees and I like having space to spread myself out.

However - having space to spread out means I do just that, and tidying up is something I hate doing!

Some months ago my son finally (at 32!) moved away from home. As we were up to our eyes with orders for shops I immediately spread out into his room using the floor as a large cutting out area and the bed as a store. Things quickly got out of hand, fabric piled up, rubbish piled up, boxes seemed to appear and the room very quickly became unusable as a spare room. On Friday morning Mary and I set about clearing it all out and re-arranging the furniture so that instead of having one proper spare bedroom and two rooms that could in an emergency get used for people to sleep in, we have made two proper spare rooms, one of which is a family room and the third room is now 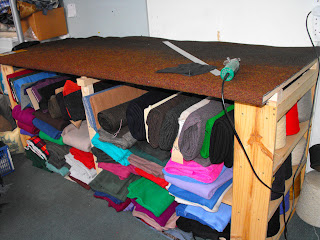 officially part of the Anna Macneil domain. Rachel & Lauren (my grandaughters) stayed the night last night and got to try out the new room. They enjoyed the extra space to play compared with what they got in the past.

On Friday afternoon I took my husband to B&Q and we got wood to build my new cutting table / tweed storage shelves. I spent Saturday morning cutting, drilling and screwing bits of wood together. Once it was all assembled I headed up into the attic and salvaged a piece of carpet that has been gathering dust there for 30 years and used that to cover the tabletop - much nicer to cut on than a hard surface as we use electric shears.

Now I have space to store all the bales of tweed in such a way that pulling out one does not dislodge half a dozen others. I also had space to put away all the tweed that I brought back from Lewis two weeks ago - not many new colours, but restocking of some of our main range. However, I did get a few lovely subtle herringbone patterned tweeds from Callum Maclean at Butt of Lewis Textiles. He is weaving more for me just now and I hope to have them available at the end of the year. Among other things, I brought back a lot of black & charcoal herringbone tweed for making wraps and some of these have already been made - a collection of wraps headed across the Atlantic to "Things Celtic" in Texas, and another few have gone to California to "Scottish Treasures".

We have also been hard at work making small things - in particular our Christmas decorations. Most evenings I am sitting making Shetland angels - a nice thing to do while sitting watching the telly. It's just a shame there is not much on worth watching, but we are amusing ourselves by watching through a recently acquired boxed set of Jonathon Creek. Celtic and Tartan hearts are also being made in quantity, but we are finding it difficult to keep up with orders. It seems that as fast as we make them, shops are asking for more - a good complaint to have!

Now I have to see if it is any easier to keep the cutting table free of clutter than keeping the floor clear. I think I will have to have clearing the space on a daily basis written into Mary's contract!
Posted by Ruth Black at 17:21