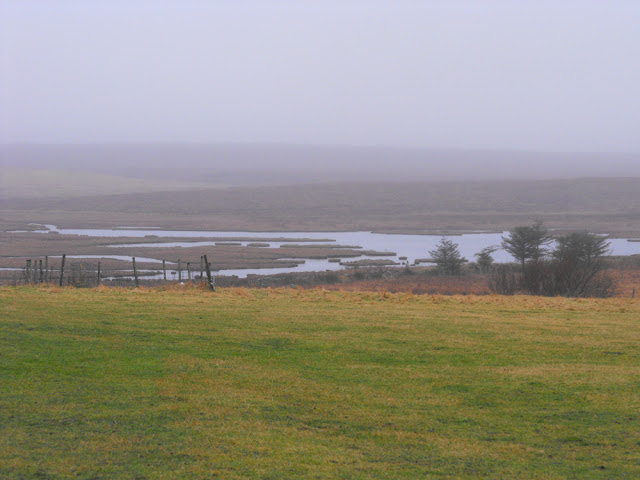 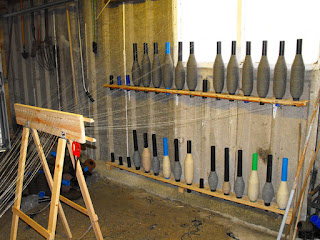 It is February, so it is hardly surprising that the weather was a bit dismal during my recent trip to Lewis. This was the view on Saturday from my mother's house, looking across the saltings at Coll.  Fortunately, no gales to stop the ferry sailing, so I got across the Minch for another spell of working at my Hattersley loom, and home again.  In the week I was there we have had some breezy sunshine, some horizontal rain, but little that could be even remotely described as pleasant. 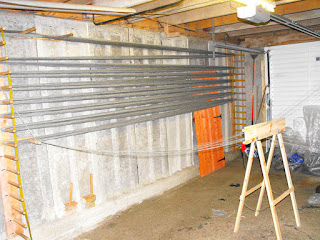 During my January visit I spent my time making warps - one for me to weave, 2 for other people to weave up for me.   I brought with me a contraption that my husband had very kindly made just before I left Inverness.  I had struggled with the arrangement I had for warping in my mother's garage because the walls are too far apart - not quite far enough apart for easily getting a car in and out, but too wide to use for warping because if I made a mistake or some yarn broke, it was too far to reach across and sort things.  What we made is a trestle arrangement with holes through which I can take the yarn from the bank so that between there and the stakes it is just an easy arm's length.   It has proved to be a good arrangement.  Not only is it easier to correct mistakes, but it is easier to avoid them because I can see the individual ends of yarn more clearly. 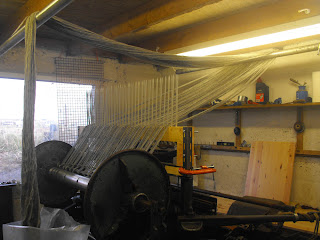 By the end of that few days in January I had two warps chained up and deliuvered to Carloway mill and another ready to beam - and then hit another problem.  Previous warps I had made had been beamed on other people's looms.  This was the first I was doing under my own steam.   The handle for the loom was too long to use when the beam is in the raised position for beaming.  I didn't have much time left on this visit, so I just left things ready to go and took the loom handle away with me so that I could get a new, shorter handle made before this visit.

So........ back on the island and ready to go.  One of our neighbours came to lend a hand with beaming the warp.  He wound the handle while I hung onto the warp to keep it taut.  It took a while, there were a few times when we had to stop and try and sort out little tangles, but after about 40 minutes I had the warp fully wound onto the beam.  Then it was a question of tying on all 696 ends - and many of them had to be rethreaded through the heddles as there had been a lot of broken ends when I was finishing off the last tweed.

This is a link to a short video clip on YouTube of me tying in the warp - taken by strapping the camera onto the spreader at the top of the loom.  I am sure there is a more efficient way of doing it, but I got there eventually.

By the end of Saturday I was almost done but not ready to start weaving.  On the island, Sunday is very much a day of rest with nothing but essential work being done, so the rest had to wait till Monday morning. 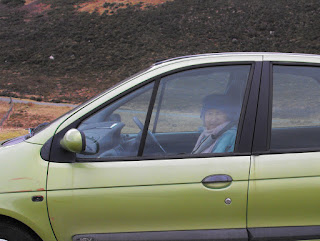 Sunday dawned fair and bright, but with an icy bite in the stiffening breeze.  In the afternoon, mother wanted to have a little outing, but by this time the wind had seriously picked up and the sun had disappeared behind the clouds.  We drove up to Garry Sands at the end of the Tolsta road.  It was a couple of years since I had been there.  As I had to struggle to open the car door against the wind, mother decided to stay in the car while I went for a quick walk down to the beach. 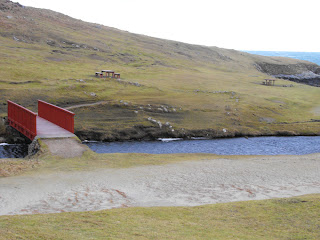 I am not sure when it was built, but there is now a bridge across the river and picnic benches on the far side, but even with my Morag hat, it was very cold, so I didn't linger.  I could really have done with having a scarf round my neck and a wrap around my shoulders, but I will need to weave some more tweed as our stocks of these are all very low!

On Monday morning I did the last little bit of tying in, wound the warp on so that the knots were all through to the front of the loom and started pedalling - and then discovered my mistakes!

I persevered and wove enough tweed for making one wrap, but then decided that there were sufficient problems to justify cutting through the warp and going back to the start.   I also got a phonecall from the mill saying that the weaver had brought back the pieces that I had left last time and htey were ready for washing and stamping.  So, I decided that getting tweed woven was more important than me doing the weaving.  I spent the next couple of days making two more warps in between doing things for my mother.  Then, I pulled out all the warp end back through both the heddles and the reed.  A bit of arithmetic was needed.  696 ends to fit through 370 slots - so not quite 2 per slot.  It was actually quicker re-threading than unthreading - at least through the reed.  I had to leave the island on Thursday, so it is left with the reed threaded but I now have to work out my threading sequence.  I have this feeling that it is pointless me trying to weave tweeds that I could walk into the mill and buy, so I want to experiment with weave patterns that will make my tweeds distinctive. - So, watch this space...............!