Shades of Autumn - another weaving adventure

While writing this, I am sitting in the marshalling yard at Tarbert, Isle of Harris waiting for the ferry to Uig on Skye.  This is an extra sailing put on because the Stornoway to Ullapool ferry was cancelled.   In theory the ferry was supposed to sail at 8pm but it is now 8.40 and the ferry has only just arrived.  It will have to unload, so I can’t see it leaving before 9.15 at earliest - suggesting 2am before I get home to Inverness!

So, the upside is that I have time to write something for this blog - first chance I have had in months.
I have had a really busy summer one way or another.  On many occasions I took photographs with the intention of including them here, but have had no time to edit them. 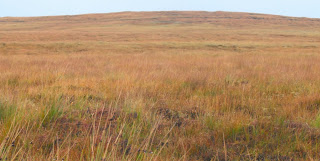 This is me on my way home from another weaving trip - thankfully a very successful one.  I arrived on the island on Tuesday and spent the afternoon making a new warp.  Inspired by the lovely autumn shades that glowed in the sunlight as I drove from Inverness to Ullapool to catch the ferry, I selected yarns in various shades of oranges, rusts and browns.  I have set the warp up so that it changes from one side of the loom to the other - mostly brown on one side, mostly orange on the other. 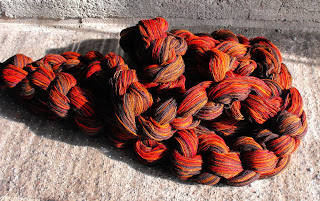 On Wednesday I spent the morning in the kitchen making things to fill up Mother’s freezer.  Spending this amount of time in a kitchen is not something I get to do very often and I really enjoy it when I get the chance.  I made soup, apple pies and gingerbread.   As the week progressed I did a few more things and now the freezer is packed full and should last until I get back at the end of the month.

In the afternoon a neighbour came down and helped me beam the warp - the process of getting the prepared warp wound onto the back beam of the loom. It is a job made much easier by having an extra pair of hands so I was very grateful to Donald for his assistance.  Once it was on, it was back into the kitchen to prepare our evening meal and then I started the tying-in process.   Just before I came to Lewis I had visited another weaver - Sam Goates - who has a selection of looms at her studio in Buckie, including a Hattersley loom similar to mine.  I had commented about how I found the tying-in very tiring and resulting in sore muscles both in my small of my back and my calves.  She showed me how she does it - sitting on a very low desk chair.  I thought it would be worth giving it a try but found that if the seat was low enough to get my legs below the beam, I couldn’t get my arms in the right position to pick up the ends for tying.  However, I played around with various positions and finally settled on kneeling on a stool padded with a 3 inch thick piece of foam.  I will need to speed up my technique though - it still took a total of 3 hours to tie in all 696 ends. 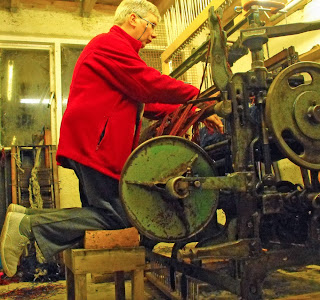 On Thursday morning I headed off to the west coast to deliver an order to the Calanais Visitor Centre.  Angus was pleased to see me as he had hardly any of our products in stock.  There were some American visitors in the shop when I arrived and they were choosing things to buy straight out of the bags before he had a  chance to put them on the shelves!
From there, I headed north to the Carloway Mill and bought some more tweed - another lovely selection which will be used to make hats and bags. 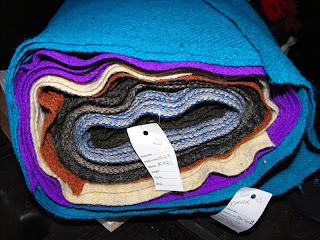 In the afternoon I finished off the loom preparation and started weaving.  My care with the warp had paid off as the weaving was trouble free.   Over the next 48 hours I got several lengths woven enough to make about 20 scarves.   However, it will have to stay on the loom until my next visit when I will weave the remaining 20 metres of tweed before cutting it off and taking to the mill for finishing. 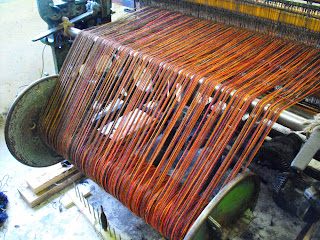 Something I have done that is making my weaving more efficient is that I developed a little database for my iPad. When I weave, I do enough length to make a scarf or wrap and then wind on an un-woven section which later becomes the fringed ends.  It is important to get the right length, and as it is all wound on the cloth beam of the loom, you can’t easily tell how much you have done. People have various ways of working out how much they have woven, but I like to measure as I am going along.  I measure each time I come to the end of a bobbin, which can be anything between 10 and 20 cm depending on the yarn I am using.  Previously, I had to just jot down the measurements in a notebook and work out the totals.  With this system on my iPad, I can just enter in the amount and it adds it up for me.  I have also done it so that I can keep a photographic record of each length woven, and it shows me how many scarf lengths I have woven in each colourway.  It is proving to be a simple and efficient way of keeping track. 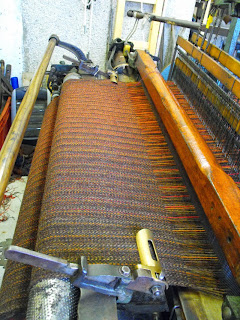 In the evenings I spent my time making more Shetland Angels.  This is a job I really enjoy as they are made entirely by hand, sitting back in a comfortable chair, watching the telly as I work.  These angels are heading to the Liquorice Tree at Edinburgh Airport and Highland House of Fraser in Inverness.  Once I get home, I will be making more for stock to sell at the various craft fairs we will be attending in the coming weeks - see the website for more details. 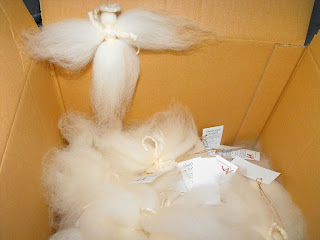 I am now sitting on the ferry, having enjoyed a good chicken curry in the ship’s cafeteria and watching the monitor which shows the position - just off the north end of the Isle of Skye, about to enter the bay.  Probably about 30 minutes at the most to get to Uig.  After that, an hour’s drive through Skye and then an hour and a half back to Inverness.  I just hope that next time I come there is no such trouble.  Mary is organising a charity fashion show on 2nd November, and as Anna Macneil will have things on the catwalk, I can’t be late for it!  See Mary’s facebook page for more details.

P.S.  Arrived home at 2am after one of the most horrible drives - winscreen wipers on full all the way, nasty gusts of wind threatening to blow me off the road and in a constant stream of traffic on twisty roads in pitch black.
Posted by Ruth Black at 19:27