The Cromarty Firth - a felt map

Today was the first part of a two day project that I had been invited to run at Invergordon Academy.   This is the week where Primary 7 pupils spend time at the secondary school so that they find out what it is like to be at the "big school".   But as well as ordinary classes, a bit of fun had also been organised - making a felt wallhanging. 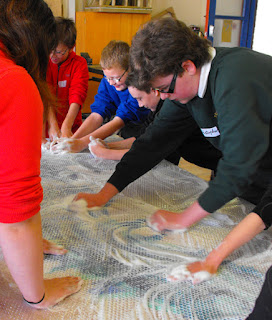 Throughout the day, small groups of pupils came and helped with the project.  The idea was to make a map of the Cromarty Firth - the stretch of water which is so important to the town of Invergordon.  In the firth you will see dolphins and seals rubbing shoulders with oil rigs and cruise liners. 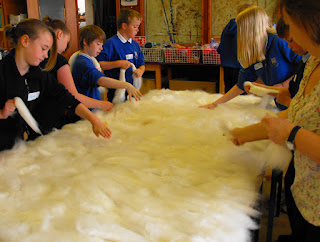 We started by making a piece of half-felt using a variety of shades of blue, laying the fibres out roughly in the shape of the firth.  We then wet it down with warm soapy water, covered it with bubblewrap and started rubbing.   After a little while, we turned the whole thing over and rubbed some more from the back.   Once it was rubbed enough to hold together, we cut out the shape of the firth and put the piece to one side.

Next stage was to lay out the fibres of white wool to make the background.  As we had an area of 2.4m x 1.2m to fill this took some time.  Once we had two good layers of wool - on top of a layer of icewool fabric, we wet it all down with more soapy water and covered with bubblewrap - more rubbing.   After a little while, we peeled back the bubblewrap and spread out the blue half-felt to as close as possible to the position it should be in.  Then it was back on with the bubblewrap and more rubbing...... and more rubbing....... till it was all felting together nicely.   At that point, we turned it over and started rubbing on the back.   After a while, we were beginning to see blue fibres coming through from the front - a sure sign that it was all working out as planned, so we took away the bubblewrap and worked directly on the felt. 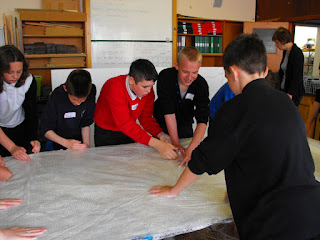 After lunch, with the felt turned back so that it was right side up, we did a bit more rubbing and then rolled it up and carried it outside to squeeze out as much water as we could - we had a good team effort and it was much lighter to carry in having shed at least a bucketful of water. 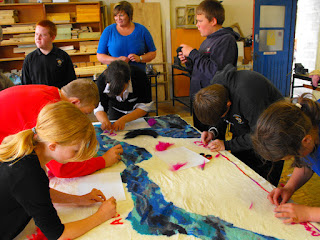 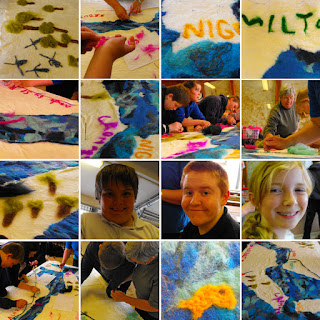 We now had the basis of our map and were ready to start adding in the details.  The felt was spread out over a piece of expanded polystyrene and we employed the technique of needlefelting to add the detail.  Some students worked on place names, other worked on things like trees and wind turbines.   We had some problems with scale - what started out as a dolphin quickly became a whale! Some people had to work upside-down - a bit of a challenge!  One student spotted my camera (I had been taking photographs when I remembered) and asked if he could take the photographs - he snapped away happily for the rest of the afternoon and managed to capture the happy atmosphere as well as the details in the felt.    By the end of the day it really was looking like a map of the Cromarty Firth. 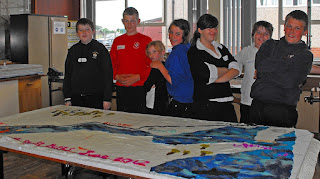 Next installment tomorrow!
Posted by Ruth Black at 19:05