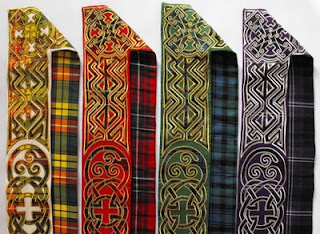 I have just finished a commission for a family in America who asked me to make a set of four stoles that they wished to donate to their church in memory of their parents. The family roots are in the county of Sutherland in the north of Scotland and they wanted something that would reflect this.

After discussions by email we fixed on using the one design for all of them, but using 4 different tartans to go with the liturgical colours - white, red, green and purple. 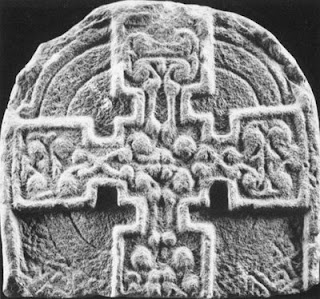 The design itself reflects the family origins, with the cross in the centre at the back of the neck based on the Clynekirkton Pictish cross-slab which was found in a village just north of Brora and is on view in the Dunrobin Castle museum.

In due course the photographs will be posted on my website. In the meantime, I have to get on with the next commission - a deacon's stole using the Isle of Skye tartan - and then a Cornish tartan stole to head "down-under". And of course, I have to carry on with all the secular work - wraps, scarves, bags, purses, cushions and wallhangings. Just as well my mother is able to carry on making the hats!
Posted by Ruth Black at 13:08 0 comments 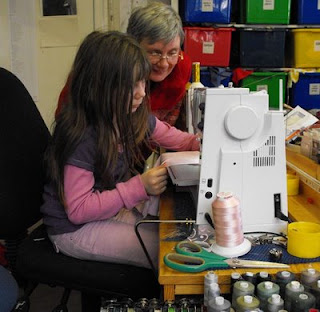 My younger granddaughter, Lauren, had her 10th birthday recently. I had promised to give her sewing lessons as a birthday present, and these lessons have happened over the last few days.
She chose to make a dress to wear to the school disco which is happening on Thursday evening. Fortunately, this has been the mid-term holiday weekend and the girls have been off school for a few days. 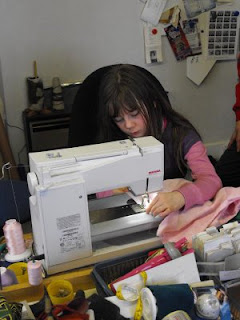 We bought a pattern and the fabric last week and got it cut out after school one day. Then on Sunday afternoon she stitched together the various pieces that made up the yoke. Today she hand-stitched the yoke facing and the side seams of the dress, followed by 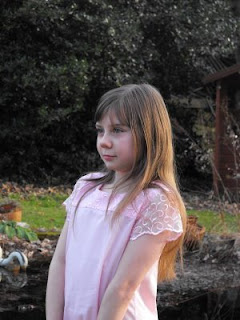 putting in the sleeves and stitching the hem - all done and looking pretty in pink!
Posted by Ruth Black at 16:45 0 comments

For the last few weeks there have been reports of severe weather in Britain, but for most of the time it passed us by. Inverness is in a very good position. Being on the east coast of the country it benefits from the rain shadow created by the mountains, making it quite a dry climate. However, in it's position at the top of the Great Glen (Loch Ness and the Caledonian canal) it also gets a funnel of comparatively warm air that is normally associated with the west coast. 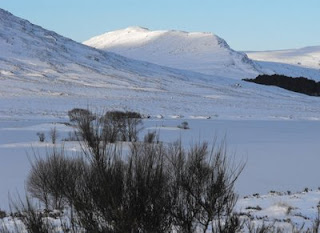 On Wednesday last week I travelled across to the Isle of Lewis to visit my mother and buy more Harris Tweed. On the drive across to Ullapool to catch the ferry I had to stop every ten minutes or so to clean the windscreen as the washers were frozen and salt spray off the road was making the glass very dirty. This photograph was taken on one of those stops, just a few miles before Braemore Junction. All the lochs I passed were frozen all the way across - something which we have not experienced for many years.

However, by the time I came home on Saturday it was raining and most of the snow and ice seemed to have gone, although as it was dark by the time I got off the ferry, I didn't get a clear view.

My tweed buying was very successful and I have lots of new tweeds for you to choose from - more or less any colour you want - so have a look at our Anna Macneil catalogue and see what you want.
Posted by Ruth Black at 20:22 0 comments