The smartest dog in town 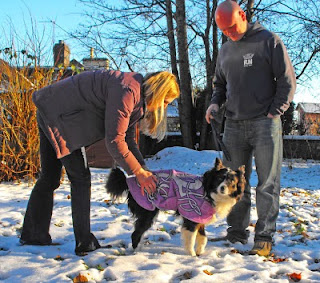 or family. The latest was the result of a request from my son George's partner, Catherine. They have collie dogs and one of them, Bronte, is quite elderly, arthritic and feels the cold. Catherine asked if I could make a tweed dog coat. She traced a pattern from one that she already had and sent it to me and I promised to make her one for Christmas.

As it was, I only finished it a couple of days before Christmas - me being me, I couldn't resist the idea of going to town with the design and rather got carried away. I am particularly fond of zoomorphic designs and developed a Celtic hound design that I have used on some other products. 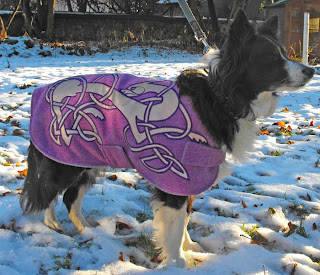 The coat is made of Harris Tweed and lined with polar fleece. The design is appliquéd with reflective silver fabric making this a high visibility coat, ideal for walking the dog early on a cold winter morning or late at night. There are elastic straps that hold the coat over the back legs and velcro straps to secure the coat around the belly and across the chest.

George and Catherine brought Bronte round this morning to show off the coat and let me take photographs. The snow is melting fast, but there is still enough around to warrant wearing a thick coat. However, the sun is

always low in the sky at this time of year and it was difficult to get good shots.

There are so many different shapes and sizes of dogs that I don't think it would ever be practical to make these as part of our standard retail range, but I am happy to accept bespoke orders. Have a look at our swatches page to choose the colour of tweed that you would like. Email me a photograph of your dog and then I will contact you with what measurements I would need and an indication of price. Factors which influence price are size and complexity of the design. One similar to this would probably work out at around £100, but I can guarantee that you won't meet another dog wearing the same outfit!
Posted by Ruth Black at 21:26 0 comments 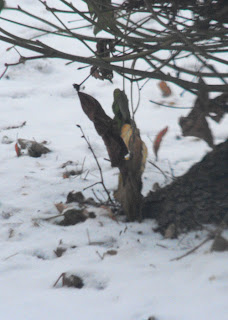 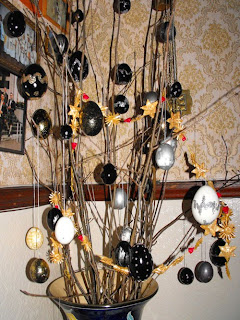 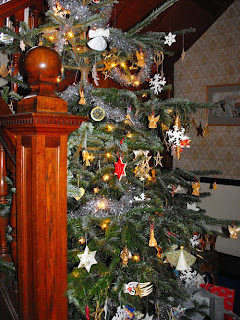 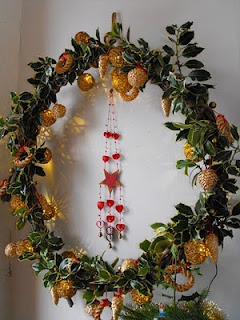 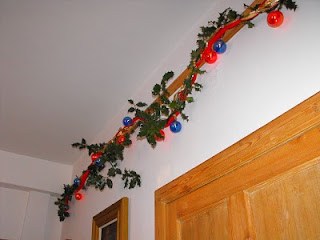 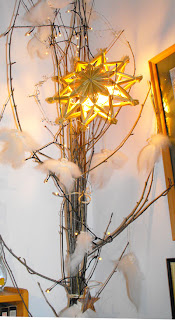 OK, now it is off to the kitchen to spend a quiet hour or so preparing veg, emptying the dishwasher and generally clearing the decks ready for the next onslaught!
Posted by Ruth Black at 14:50 0 comments 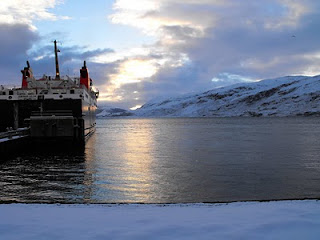 I am on the Isle of Lewis having been visiting my mother. On Wednesday when I traveled here it was touch and go whether I would make it across to Ullapool to catch the ferry. The road was closed until 7am because of snow drifts. I arrived at the ferry terminal just before the ferry did and at that point it was lovely sunshine and all the land round about was white with snow.

However, once on board it had all changed and we sailed from Ullapool in a blizzard that was so thick you could see no land even though we were only yards from the shore. That soon cleared and it was plain sailing the rest of the way - bitterly cold, but bright and calm. 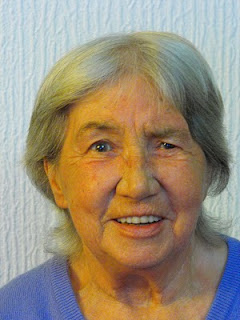 Landing at Stornoway it was clear that they had considerably less snow than the mainland but there was still a lot of white around, particularly across the moors.

I found my mother in reasonably good spirits, though feeling her years and much slower moving around than when I was last across.

On Thursday the weather had changed - instead of 2 degrees, it had risen to 10 and all the snow had gone from around the house and the only evidence of the cold spell was the skating rink that was trying to pretend it was a garden path. Late morning we headed out to the west of the islands to visit some of our trade customers and also to purchase more tweed. Most of the lochs were still frozen over despite the rise in temperature but it was a dark, damp day.

On Friday it was still mild, but as you can see in this photograph it was dreich. This is an old Scots word that loosely translates as drab, cold, damp, miserable - the sort of weather that is completely un-inspiring and makes you convinced that we were meant to hibernate for the winter. This picture gives an idea of just how desolate the moors can be, but it seems to show everything much brighter than it really was. 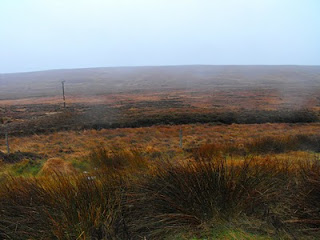 Driving across the moor to the Butt of Lewis I was contantly reminded of one of the reasons why I DON'T want to live on the island.

However there was a plus side to my journey. I went to visit Callum Maclean and collect some tweed he had woven for me. So, between what I got from him and elsewhere, I am going home today with a car packed full of tweed. I have left some with mother to make more hats - certainly the weather for hats and that was what we sold most of at our recent craft fairs. I will go home and make scarves, wraps and lots of other things to have them all ready for the trade show we will exhibit at in January. I know that Mary has spent the last few days sorting out the workroom so that I will have space to put away all our new tweeds. 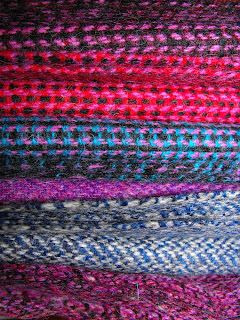 This photograph shows a small selection of some of the ones I selected particularly for making hats, and in due course the other swatches will appear on our website. Also pictured is one of Callum's tweeds - an autumn toned check - which I particularly like and bought a lot of it.

Now the sun is shining again, the winds of last evening have dropped and it looks as though the ferry is running on time, so I will be back across the Minch this afternoon. 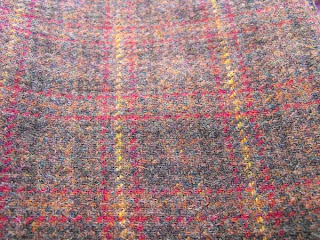 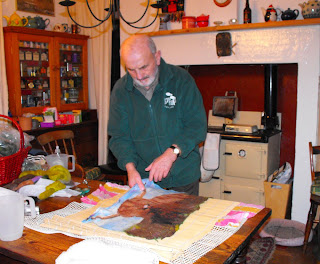 In the summer I did a felt workshop for the Merkinch Arts Festival and one of the people at the workshop was so delighted with the techniques I taught that he asked to come and do a one to one session with me.
Alistair - a retired farmer - particularly wanted to make a felt picture of a Highland cow. Normally I would have held the session in my studio in the garden (a wooden shed) but the weather was so cold that we couldn't have worked there for more than about two minutes without hypothermia setting in. Added to which, the water supply to the shed is by way of a garden hose connected to an outside tap - all frozen solid for the last two weeks. 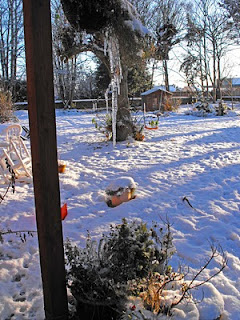 So, knowing the theme for the felting session, I brought in the colours of fibres that I thought we would need along with the various pieces of equipment and we worked at the kitchen table. It was warmer and more spacious and the only drawbacks were that I had to clear things off the table (in our house, nature abhors a horizontal surface!) and we didn't have the benefit of the height adjustable table that I have in the studio.

Alistair came with a photograph that he wanted to work from and we set about making his picture. He went home delighted with the results, and I have to say I was pleased too. He has a little work to do with adding some fine detail using needle-felting, but I think for a novice he made a pretty good job of it. 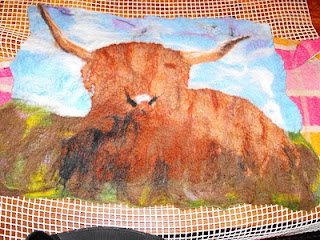 The sky and the foreground were achieved by traditional wet-felting, with the cow being made using an inlay method combined with some needle-felting that was put in before we did the rolling. The finished picutre had a nice feel of summer for such a cold winter evening. Alistair has taken the picture off with him to Norway to show his daughter.
Posted by Ruth Black at 22:43 0 comments