I am just home after having spent the last few days on the Isle of Lewis.  Once again, I was working with my Hattersley Loom.  I had left it last time with a new warp tied in and just a few centimetres of tweed woven.  The theory was that it was “all ready to go”...... but............ 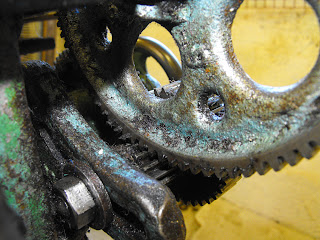 The first problem was that there were some broken warp ends that needed fixed - I‘m getting quite proficient at that!  The next issue was rather more troublesome.  The cloth take-up roller was not working.  On close examination of the cogs, I could see that the large cog on the roller was not properly engaging with the small cog below.  I figured out how to adjust it and all seemed well, but a few more passes of the shuttle and the same thing happened again - and again.
I was certain it would be something simple that I just didn’t understand - as a novice I still have lots to learn about the workings of the loom.  Rather than tear my hair out, I got my camera, took lots of photographs, analysed what was happening and phoned Angus - the very kind weaver who had set up the loom for me earlier in the year.  Fortunately he was at home, so I asked if I could email him photographs to see if he could figure out the problem for me.   As I suspected it was a simple problem - the straps that hold the weights that keep the cloth beam in place had stretched and they were just skimming the floor, not really giving enough weight to fully keep the cloth beam pressed up against the take-up roller.  So, got that sorted quite easily, but then had problems getting the tweed back onto the roller. 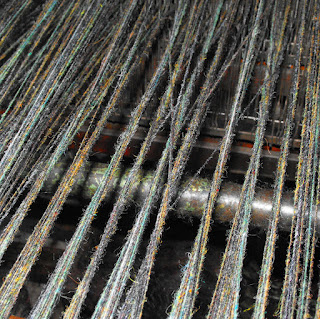 I was also having problems with the warp - it had got twisted when I was beaming it last time and I hadn’t really succeeded in getting the ends in the right order.  There was a lot of crossed ends resulting in a tangle behind the heddles - and it is quite a hairy wool that I am working with, making the tangles difficult to free.   I decided that it was worth taking the trouble to cut it off, discard a bit of the warp and re-tie it.   This took me a few hours - so it was Wednesday before I could start weaving.  Once I got going, it was reasonably plain sailing, though I still have a bit of tangling behind the heddles.  The remedy is that every few inches of weaving (1 bobbin’s worth) I stop, go behind the loom and run my fingers through the warp ends to free the tangles - always in the same places, but it will be quicker than re-tying again and will allow me to finish off this warp.  I have got about half way through the 30 metres, but the remainder will have to wait for my next visit.

I didn’t spend my whole time on the island at the loom.  Part of the purpose of my visits is to help my mother.  She still makes the Harris Tweed hats that were the start of the Anna Macneil business, but now well into her eighties, she is definitely slowing down and needs help with a lot of things. 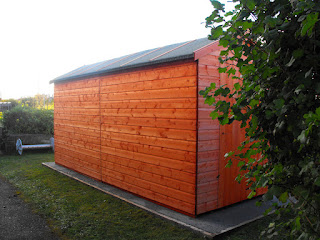 On Wednesday afternoon I drove up to the Butt of Lewis - the most northerly point of the island.  The reason for this visit was to collect some tweed - some for us to use for making hats, scarves, bags etc. and some that had been woven specially for a company called D R Harris - a chemist shop in Mayfair, London.  I will be making up some wash bags for them with this tweed in the next few weeks. 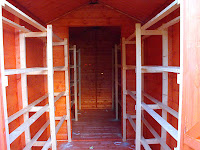 Another thing achieved this week was the erection of my new yarn store.  This is a long garden shed with racks down each side.  Much of my yarn is currently in storage in Stornoway so my choice of colours is a bit limited.  Next visit will see all the yarn neatly stored and sorted by colour.  I had someone erect the shed, but I had made the racking so that it was easy to just pop it in and screw it to the frame.  Getting this shed was made possible by the generosity of my sister and her husband who have a cycling shop in Ayrshire - Walkers Cycling.  It was impossible to get a shed directly to Lewis and all the websites I tried either wouldn't deliver to the Highlands, or charged such a high premium that it made the cost prohibitive.  But Susan and John kindly acted as a staging post and accepted delivery of the shed at their store and then waited for it to be collected by Hebrides Haulage the next day. 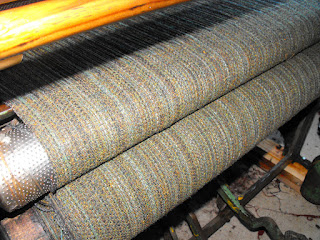 I spent more or less all day on Thursday at the loom.  The current batch of tweed has a green warp, comprising a mixture of lovat green, olive, khaki, brown and charcoal arranged in a random order.  I am weaving fringed lengths that we will make into scarves, so each length is being woven with a different colour of weft, making them all different.  So far I have woven a length each with lovat green, olive green, brown and yellow.  When I go back to Lewis next month there will be a few more lengths woven with more colours before I cut it off the loom to have the tweed finished at the mill. The section you see here is woven with an olive green weft.

Mother has just emailed me a photograph that she took of me at the loom - thought I might as well add it in here.   I have also added a short video clip showing the loom working - starting with putting a pirn into the shuttle.  The camera wobbled a bit when I started pedalling but then settles down.  In the couple of minutes that it took to film this, I had woven about 10 centimetres. 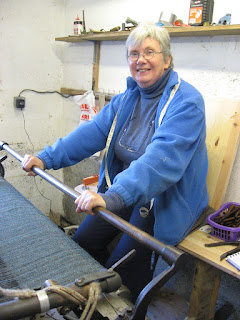 My First bale of Harris Tweed

A couple of weeks ago I got my first batch of Harris Tweed back from the mill.  I had woven it in sections with different weft colours so actually got 4 different tweeds on the one roll - three of which I have now used to make up into a variety of products. 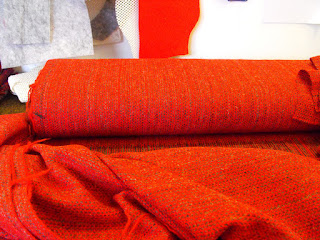 On the roll here you can see the bright red version.  It is not actually quite as bright as it shows in this photograph but red is a very difficult colour to photograph.

This section has been made up into some scarves but I have not yet had a chance to photograph the finished products, and as they have to go out in an order over the next couple of days, I probably won't actually take any more pictures. 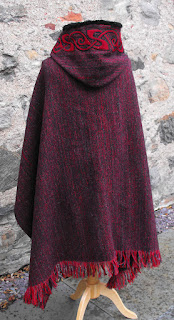 Two of my shop customers were waiting for a supply of Hebridean hoods, so they each got one made with some of this special tweed.    Canongate Jerseys & Crafts in Edinburgh got one that had been woven with an almost black weft and so I used black stitching and black sheepskin to trim the hood.  This particular length was on the long side, but I decided to leave it with the extra length.  I had to photograph it just on the display bust as my models were not available and I wanted to send the parcel off quickly.

The other batch of hoods was made for Scotch Corner in Oban.  They got 5 hoods in a variety of colours, including one made with the red tweed.  This particular one used the section woven with a brick red weft.  The finished hood has rather a "Little Red Riding Hood" look, but I am sure there will be someone who likes it.  Here you can see the embroidery in progress.  This bit gets stitched before the garment is assembled. 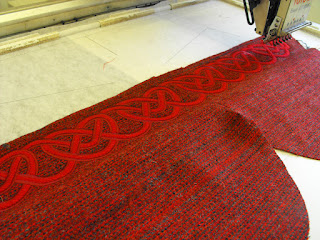 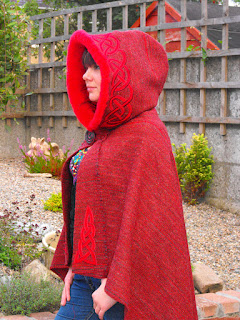 As I was delivering this order personally, I had a little bit more time to get everything finished and I made sure I had Mary around so that I could photograph the red hood properly.  She came round for Sunday dinner along with her husband and children and we did a quick photoshoot in my back garden before I headed off to Oban on Monday.   I don't normally make these deliveries in person but we were in Oban for an ordination service and it was convenient to take the order with me - also nice to visit the shop as I hadn't seen it before.  A lovely shop - well worth a visit if you find yourself in the area.
Posted by Ruth Black at 22:04 0 comments