Storing my yarn and touring the Isle of Lewis 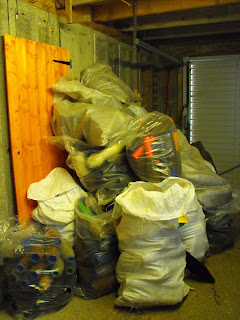 I spent the last few days on the Isle of Lewis.  A week ago my stock of yarn for weaving Harris Tweed had been brought out of storage where it has been for the last 7 months and delivered to my loom shed (or my mother's garage, depending on who you are talking to!)   I arrived on Monday afternoon and set about sorting through the sacks of yarn and storing them in some semblance of order in my new shed.   I didn't think to photograph the pile before I started.  It filled most of the garage.  This picture shows it once I had moved about two thirds of the yarn. 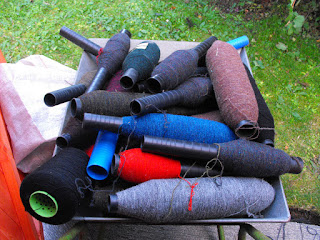 I found the easiest way to move the yarn was to use the wheelbarrow.  I emptied a sack - usually about 15 to 20 cops - into the barrow and trundled it up the path to the shed.  I then stacked the cops on the shelves I had made last visit, trying to keep in colour order.    Some sacks were just a single colour but most had a bit of variety.  Some cops are almost full, others half used - and a few cones as well.
For the first couple of hours I felt that although I was filling up the shelves, the pile in the garage seemed to remain much the same size.  I was seriously doubting my calculations that I had made when determining the size of shed I needed.

However, on Tuesday once I had put in another few hours of muscle-power and got the whole pile shifted I realised I had got my sums right.  I would have space for another few cops - but not much more than that.

I am now able to see what colours I have - pretty much every colour except purples - just 4 small cops, each a different shade, so there will be no purple tweed woven for the foreseeable future! 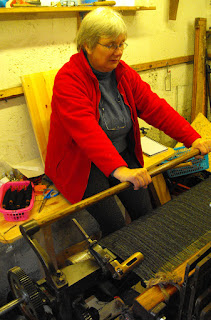 The tweed on the loom just now is green - the warp is a lovely mix of olive, sage, charcoal and mid green.  I am weaving different sections of it with different colours of warp.  These will be used to make scarves, wraps and our Hebridean hoods. 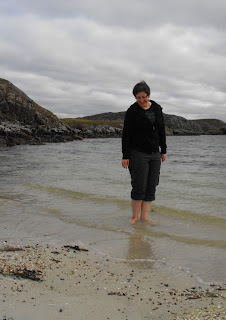 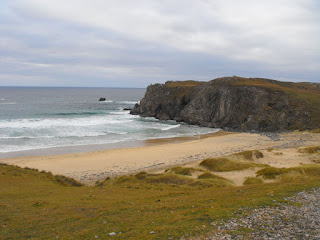 On Wednesday we had good weather and my son Simon had arrived with his girlfriend Megan to stay for a few days.  Megan has not been to Lewis before and it is many years since Simon visited the island so we took the day off and drove over to Reef.  This is a beautiful beach on the west coast at the top of Loch Roag.  The beach is over a mile long and for most of the time we were the only people on the beach.  Megan was so entranced she took her socks and shoes off and went paddling!  After a couple of hours walking along the beach, across to another small beach and back again, we got back in the car and drove a little further to Mangersta bay.  It was not windy enough to really so this beach at its best - in stormy weather the waves are spectacular. 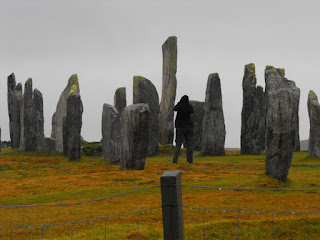 On Thursday the weather was dismal but I had to make a delivery to the visitor centre at Calanais, so we took Megan to see the standing stones.  Even in the rain she couldn't resist taking photographs, but I stayed in the car and Simon and Megan retreated very quickly! 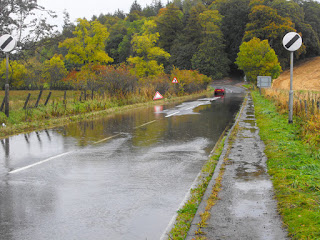 Friday was every bit as dismal as Thursday.  I spent the morning weaving and then at lunchtime we had to head off to catch the ferry.  Driving home from Ullapool the rain was heavy, but it had obviously been even heavier earlier as the streams were all raging torrents with waterfalls in places that normally have nothing more than a tiny trickle.  In several places the road was flooded and only just passable.  Just beyond Garve there was one part where the side of the road had collapsed.  At Beauly there was a fire engine pumping water off the road.  I wanted to show Simon and Megan the studio (it is almost two years since they have visited Scotland) but when we got to Inchmore we were turned back because the road was closed with flooding.  We had to make a detour back through Beauly and over the Black Isle and Kessock Bridge.   It was with some trepidation that I headed out to the studio this morning, but fortunately the studio was dry.  My landlady told me that we missed being flooded by just millimetres and many of the houses in the village had problems.  There was an abandoned car stuck in floodwater just along from the studio but most of the floodwater had been cleared and there were diggers at work clearing out drainage channels.
Now it is back to work with a vengeance.  Lots to do after my week away - orders to fill and stock to make so that I have something to sell at the craft fair coming up next weekend.
Posted by Ruth Black at 23:12 0 comments