The two things don't really go together - but they are what Mary and I have been occupied with over the last little while - as much as we could fit it in around our main work at Anna Macneil making embroidered Harris Tweed fashion accessories.

Mary's new venture - LochDress - is designing and making couture wedding dresses with a tartan and/or Celtic theme.  She will have a stall at the Strathpeffer Pavilion Wedding Fair on Sunday 25th March at which she will have a beautiful dress on display along with fabric samples, stitched embroidery samples and a few bits and pieces.   She will also have some examples of interesting glass wedding favours made by my friend Gail of Half-A-Moon.  Gail works with traditional stained glass and hot fused glass to make beautiful things ranging from small favours through to huge windows - have a look at her website, or better still, visit her studio at Ardersier. 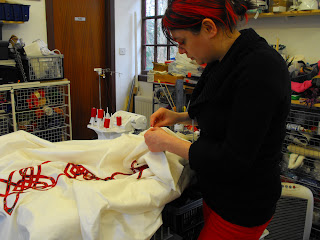 Although much of Mary's time at the studio has been spent on our normal work, she has worked longer hours so finish off the dress and here I am giving you get a sneak preview, letting you see Mary at work.  The dress is ivory silk combined with silk tartan (Prince Charlie) and features Celtic knotwork appliqué also in the tartan.  A particularly interesting feature of this dress is that after the wedding, the hand stitching along the top edge of the white bodice can be easily unpicked to reveal the tartan dress which can be worn on it's own - so, two dresses for the price of one! 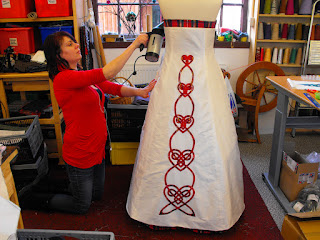 She spent an evening with her friend Jenny - who modelled the dress, plus a hairdresser / beauty therapist (whose name I can't remember) who did make-up and styling along with a photographer (whose name I will no-doubt hear in due course!)  and they have got lots of lovely photographs which Mary will use to produce leaflets and other promotional material.   They were kindly given use of St Andrew's Cathedral in Inverness as a "studio".

All this has been happening while I am away from Inverness.  I am currently on the Isle of Lewis taking my Harris Tweed weaving project to the next stage.  The good news is that I now have a functioning loom.  On Friday and Saturday I spent time going through all the bits, cleaning off some of the grot and debris and spreading everything out over the garage floor so that we could see all the pieces easily.   I thought there seemed to be some duplicates and it was hard to know what was needed and what was "spares" - but I know enough about how it all works to realise that I had no shuttles.  However,  a quick phonecall to Dora, from whom I got the loom, established that there was indeed a bag of about 30 shuttles over at her place and Len and I went across yesterday morning to collect them - along with other "spare parts" and some more vital components that had got left behind last time. 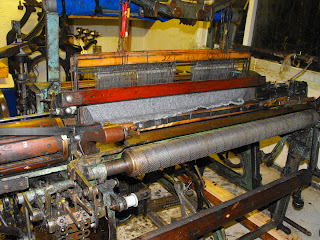 I had been advised that Angus Morrison was the best person to get to  assemble the loom and he duly arrived about 4.30 after finishing his work as a postman. (one of the features of life in this part of the world is that nearly everyone turns their hand to more than one job.)  He looked at all the parts and scratched his head!   Several people had asked me "is it a mark 1 or mark 2 loom?" to which I had always replied - "sorry, I don't know".  The reason for that soon became clear - I have a mark 1.5!  Some bits are version 1 and other bits are version 2, and they have been used in an "unconventional" way!  However after looking at some photographs I had taken of the loom before Ian had dismantled it for transport, Angus was able to figure out what was needed and after about 5 hours we had a loom that functions. 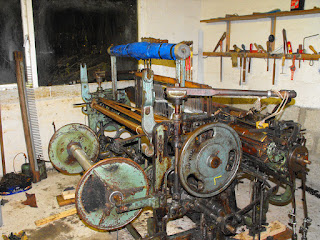 It still needs a lot of fine tuning and adjustment, but this can't be done until I have a warp on the loom.  Today's task is to clear away all the spare parts from the loom so that Len and I have space to work to put a warping frame up on the wall and then next time I visit the island in April we should be able to get the loom fully functioning.

Later in the week I head back home to catch up on the embroidery side of things - loads of scarves and bags to make for Anna Macneil and also some ecclesiastical work to get sorted out - plenty to keep me occupied........ No rest for the wicked!
Posted by Ruth Black at 08:40 0 comments