Our introduction to South Uist was wet. It started raining as we crossed the Sound of Barra to Eriskay and it got wetter as we crossed the causeway to South Uist so we just headed straight to Daliburgh and our next self-catering place. We settled into Loch View Chalet and had a lazy afternoon watching the swans, ducks and grebes that live there.

The next day dawned fair, but pretty windy and we decided to do a tour of the Uists. I forgot to take my camera with me that day - so no photographs!

On North Uist we drove up a hill track on the west side of the island where there is a telescope set up so that you can see St Kilda, however it was actually easier to see it with the naked eye and visibility was not good, so all we saw was a grey mound rising up from the sea on the horizon.

Weather the next morning was lovely but we decided to stay close to base. We popped along the road to Lochboisdale and picked up information from the tourist office. Then we took the road through our village that heads across the machair towards the sea. Here there is the remains of an ancient settlement - the Cladh Hallan roundhouses. They were excavated just a few years ago. 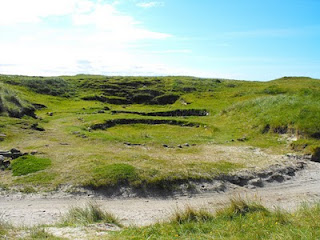 The next day we headed up towards the top end of South Uist and tried setting up Len's telescope to see if we could get any better a view of St Kilda, but once again there was a lot of cloud on the horizon and St Kilda was nothing more than a faint grey mound. 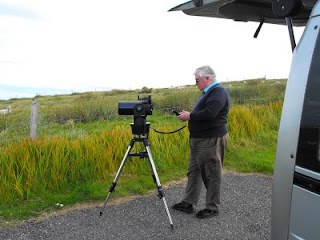 We also visited the medieval chapel site at Howmore - somewhere 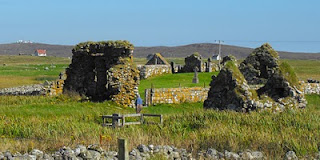 I had visited while on a cycling holiday here some 15 years ago, but it had been horizontal rain that day and I hadn't really appreciated the ruins.

A visit to Kildonan museum was very interesting - it covered all aspects of the history of the island. I was particularly taken by the box beds and the old loom. I had already taken several photographs by the time I saw the sign saying "no photography".....OOPS! 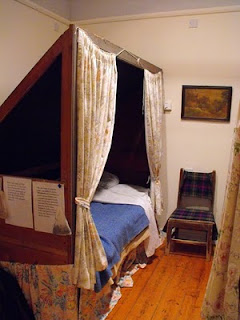 We had picked up a small booklet "Made in the Outer Hebrides" and I very quickly homed in on an venue at the south end of the island - the Hebridean Woolshed.

We headed down there and found the place very easily - a lovely walled garden with a small summerhouse type shed just inside the gate. 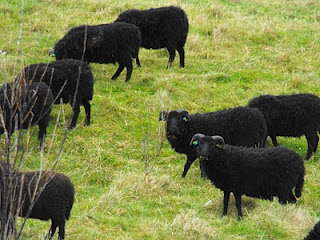 In this shed there was a mixture of handcraft items and preserves, all made by Denise Bridge. I found her hanging out her washing and we had a lovely conversation about all things wooly, that ended with me buying a couple of small Hebridean fleeces. I shall be using them mostly for feltmaking, but that will have to wait until my right hand is back in full working order. We followed Denise's directions to Eriskay to find her Hebridean flock. Easily found - and quite happy to pose for the camera. 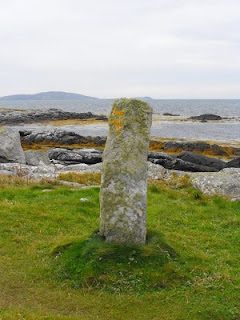 On the way back we stopped at the standing stone at Polachar before heading back to our cottage. Then, unfortunately, it was time to start packing up ready for our departure the next morning.

All in all, a wonderful, relaxing holiday - just what the doctor ordered.
Posted by Ruth Black at 18:44 0 comments

It was my birthday while we were staying on Barra and my birthday treat was a boat trip to Mingulay. This is the most southerly but one of the Outer Hebrides chain of islands and was inhabited up until 1912 when the population level dropped too low to be sustainable.

The weather that day was wonderful - warm and sunny with just a light breeze. The sea was almost mirror calm. We set off in the M.V. Boy James at 10am from the slipway in Castlebay. When I say "we" I mean me, the skipper, Donald Macleod and the other holiday makers - my husband elected to stay on shore because he really doesn't like small boats. 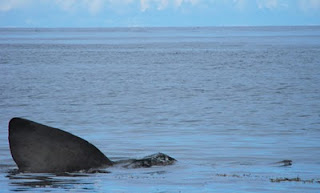 About an hour into the sail we slowed right down to watch basking sharks. I had seen them in the distance in the past but never as close as this - just about 10 feet away these massive 30 foot long plankton eating sharks were quite a sight.

Wind and tide were in our favour and the skipper was able to take us right round the west coast of the island past some spectacular cliffs and through a narrow channel spanned by a natural arch. 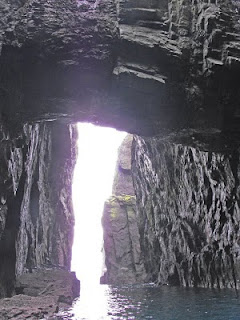 On the east coast of the island there is a lovely sandy beach and we disembarked on the rocks at the north end of the beach for 3 hours on shore. I set off uphill across the narrowest part of the island to Eagle Cliff. Unfortunately the eagles were not to be seen that day, but the cliffs were perhaps even more spectacular when seen from the top. 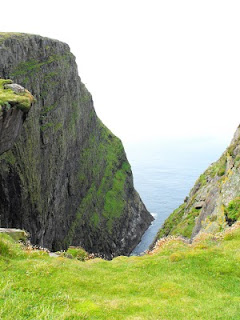 I sat up there to eat my picnic lunch but soon had to start walking again to escape the midges.

I walked along the ridge of the hills for a while getting the most of the midge-moving breeze before heading back down to the beach. 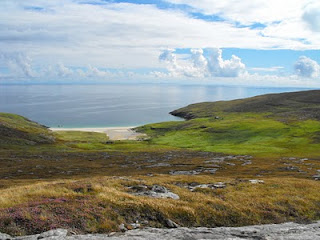 The remains of the village are still clearly visible as are the lazybeds field system that were in use a century ago. I took lots of photographs, including quite a few wild flowers that I will use for the basis of some new designs for our "moor and machair" range of floral designs on our bags and purses. 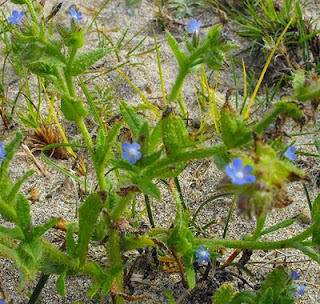 There were more sharks on the way back to Barra, plus lots of seabirds to watch and it seemed no time at all before we were back on shore.

What a wonderful day out - possibly the most memorable birthday I have ever had, topped of by a meal at the Craigard Hotel - in their conservatory dining room overlooking the bay while the sun set slowly in the west.
Posted by Ruth Black at 11:35 0 comments 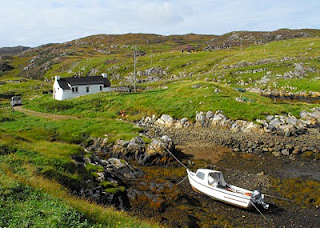 We wanted a "get away from it all" holiday this year and that was certainly what we got in this delightful cottage on the Isle of Barra. We stayed here for almost a week and what a delight - no mobile phone signal, no television, no radio. I suppose it would be difficult to live this way, but for a holiday it was wonderful.

We arrived off the ferry from Oban about 8.30 on the Monday evening. In Oban it had been raining stair-rods most of the day and we were wondering whether it was wise to be heading for the Outer Hebrides, but by the time we arrived the clouds had dispersed, there was just a gentle breeze, the full moon was rising over the Minch and we could see the island of Rhum clearly from the cottage window. 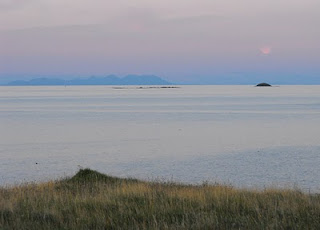 South Bank Cottage is just a few miles from the "capital" Castlebay in the village of Earsary on the east coast of the island. It is a converted Whitehouse. A whitehouse is one step up from a blackhouse - still very thick walls, small, but with the addition of windows and chimneys. And unlike a blackhouse which is bare drystone walling, the walls are rendered and painted white.

Our first day was spent just meandering around the island getting a feel for the place. We went up to the north end and saw a plane coming in to land on the beach. Barra boasts the only beach airport in the world to offer daily scheduled services - they are just scheduled to coincide with low tide. It is quite something to see a plane landing on a beach where there are several people cockle gathering. 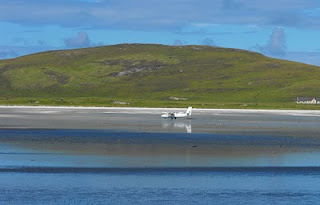 This was one of the busiest beaches we came across - there were 6 people on it! Most were deserted even though the weather was fine and we are still in peak holiday season.

On the Wednesday morning we went into Castlebay and took the boat trip to Kisimul Castle - the medieval seat of the clan Macneil, set on a rock on the middle of the bay. The castle is now managed by Historic Scotland and is open to the public for the summer months. We were the first visitors that morning so had the place to ourselves. 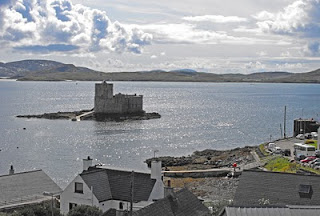 What a delightful surprise on entering through the gate of the castle - inside this rather forbidding and defensive fortress everything was suddenly on a small domestic scale. 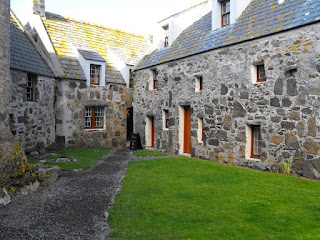 There were houses built with their backs to the main castle wall arranged around a little courtyard, almost like a small village. Part of the castle had been made habitable again in the middle of last century and it was enough to give one a feel of what a comfortable home it could be now that we have all the luxuries that modern technology can provide. I can recommend it as a place to visit - and they have a well stocked shop that inlcudes hats, scarves and bags from our embroidery business - Anna Macneil.

The next day was a wonderful experience - a trip to Mingulay - more of that in the next post. Friday was spent doing a bit more pottering around. We headed down to Vattersay, the most southerly of the inhabited islands in the Outer Hebrides, but joined to Barra by a causeway. We stopped en-route to visit the remains of a wheelhouse - an iron-age dwelling peculiar to the Outer Hebrides and the Shetland Isles. In this particular example there were remains of several buildings from different periods. The wheel house pictured here is so named because it is circular and has internal walls arranged much like the spokes of a wheel, creating little rooms which appear to have all had specific purposes. 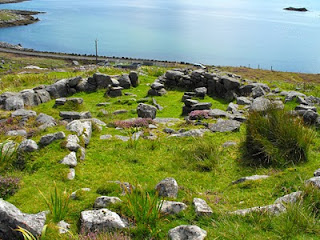 Our time on Barra came to an end the next day. If we had been heading straight home it might have seemed quite a disappointment, but fortunately we had another few days holiday to go - we were simply heading across the Sound of Barra to the island of Eriskay and then on to South Uist to continue our Hebridean adventure.
Posted by Ruth Black at 16:34 0 comments