Photo Session - supposed to be spring! 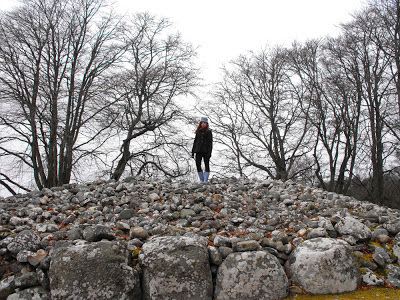 I had several things that I wanted to photograph.  Since it is now officially spring and my granddaughters were free this morning to do some modelling for me, we headed out to Clava Cairns a few miles from Inverness. 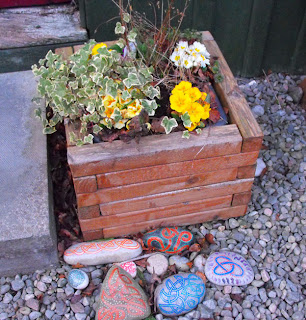 It was a biting cold wind, reasonably bright, but no evidence that spring is anywhere near, other than that the primulas in the planter at the front door of the studio are in full bloom.

Clava Cairns are ancient stone burial chambers quite close to Culloden Battlefield.  They were built around the same time as the Egyptian pyramids.  There are three large cairns and they are ringed with standing stones.  There are also lovely trees all around, so it makes a good venue for photographing our wares.  For more information about the site, click here. It is an unmanned site, free to enter and managed by Historic Scotland - well worth a visit if you are in the area. 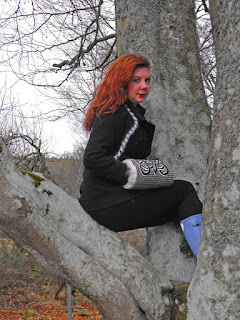 We took with us several of our ever popular Hebridean Hoods and our Wide Embroidered Wraps, plus a selection of bags, purses, hats and scarves.  The girls are now old enough and tall enough (ages 14 and almost 16) to be really good, co-operative models, but still young enough to enjoy running around and playing.  Lauren decided to climb a tree with this muff purse!

After an hour or two of photography, we were quite chilled and it was time to take the girls back into town for their skating practice.  They are off soon with their team for the Scottish championships.  I then headed out to the studio to catch up on work.  Since I came home, I have spent the evening going through the photographs, putting some of them on the website, updating some pages and changing pictures.

I hope this selection give you a flavour of what our morning was like. 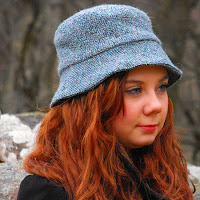 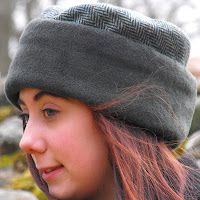 Rachel wearing our most popular style - Morag.   We were not the only people to think it cold today - some ladies came into the studio this afternoon and two of them bought Morag hats - to put on right away! 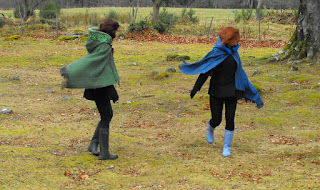 At the end of our session I asked the girls to choose their favourite thing and I photographed them together - they both chose a Hebridean Hood.  These short capes are made with Harris Tweed, have large hoods that are lined with polar fleece, trimmed with real sheepskin and fasten with a single large hand-made button.
The green one is tweed that I wove myself - a lovely herringbone pattern with a subtle striped look. I used the same warp to produce several different shades of green by varying the weft colours.  You can see a different variation in an earlier post - click here.  Below, you see the girls inside the chamber of the largest cairn - sheltering from the cold wind. 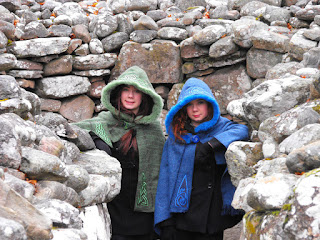 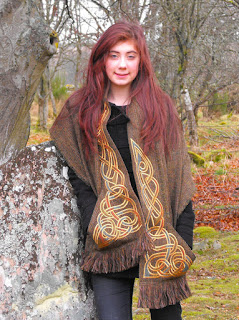 In this picture, Rachel is wrapped up in one of our wide embroidered wraps - this one stitched with a metallic bronze coloured thread on a brown/olive herringbone tweed - a wonderfully warm extra layer that looks equally good whether teamed with denims or a silk ballgown.