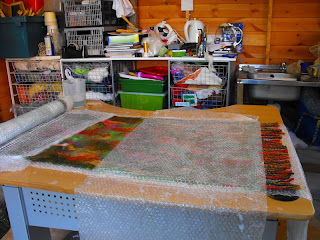 After two lovely days in which we sat outside in the garden, today was cold and windy. As the day wore on the grey sky cleared and the sun came out but the wind felt as though is was blowing straight from the north pole - and it was blowing hard.

I retreated to my studio and spent the day making felt. The hard work of felting and milling helped to warm me up, but my feet were frozen. 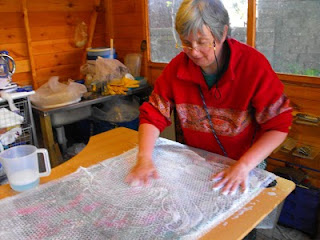 Today's project was inspired by two things - the flowers in the garden and some balls of rainbow dyed merino pencil rovings. Pencil roving is the term for fleece that has been taken through the preliminary stage of spinning for commercial spinning. 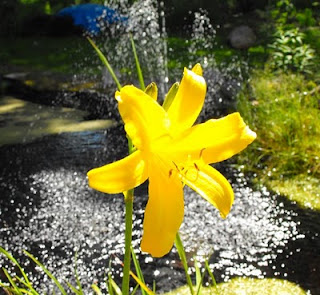 I have found that with the aid of a battery powered "hair braider" it makes really good twisted tassels for a fringe. I cut lengths of about 12 inches and twisted them up, then brushed the ends with fine mini carders and blended these fluffy ends in with the fleece that I used for the rest of the felt. This piece of felt will be used as a base for one of my Celtic knotwork embroidery designs. My intention is to stitch a quite open knotwork design so that it looks rather like a garden trellis and then possibly add in a few little flowers to pick up on the colours of the felt.

It is quite amazing how 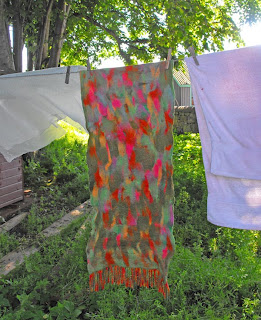 At the end of the afternoon I spent a little while preparing for tomorrow's Sunday School group. We will be making a felt picture of the story of Noah's Ark and the rainbow. If it works out, the pictures will appear in my next posting.
Posted by Ruth Black at 18:50