After my relaxing week making felt in the garden during my "open studios" event, it has been back to work with a vengence trying to catch up with embroidery orders. 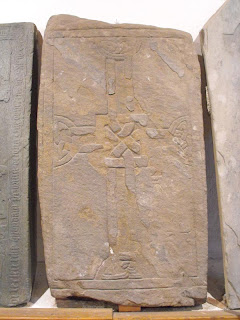 The last couple of days has been spent making large Celtic Cross wallhangings for Iona Abbey. This batch includes two new designs. Last summer I was able to visit the abbey and I took lots of photographs of the wonderful collection of Celtic crosses and grave covers that are housed in the abbey's infirmary museum.

I already had designs inspired by the wonderful St John's 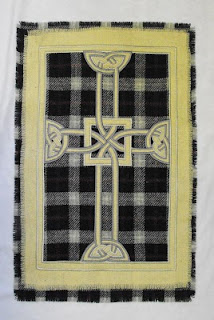 and St Martin's crosses, but I wanted some simpler, less "busy" designs. These two stones particularly appealed to me and both designs were relatively straightforward to depict in embroidery. The wallhangings are approximately 40 x 60 cm and are made with Harris Tweed. 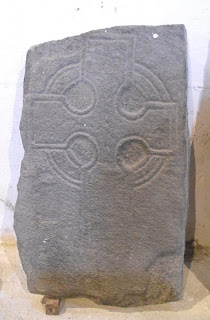 The plain ringed cross was just a bit too plain so I have used artistic license and added in some Celtic knotwork. Although this is my own invention, it is entirely in keeping with the style of many of these stones and follows the rules of this artform. 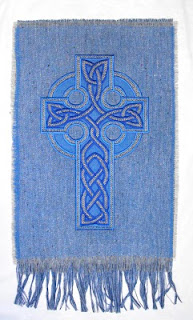 These wallhangings, along with two new priest's stoles will shortly be winging their way to the Abbey, where they stock many of our products such as bags, scarves and hats.

We make two sizes of Celtic cross wallhangings - large ones like these, and small ones just over 10 x 20cm. The larger ones often get bought to be used as pupil falls in churches. The small ones go all over the world - the last one that I sent off was being taken out to Malawi. The next design that I have to work on this week is the Kilnave cross on the Isle of Islay and this will be on the small size of wallhanging.
Posted by Ruth Black at 18:15